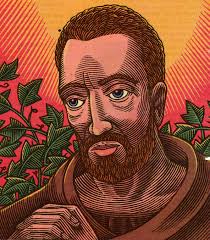 Augustine’s de doctrina Christiana is most relevant to contemporary theological and philosophical concerns. It anticipates Wittgenstein, Peirce, and Eco, as well as the cultural anthropologists; it has an almost postmodern feel at certain points; it is a text in theological hermeneutics. Augustine’s answers are sometimes (in my view) deeply wrong; but he asks all the right questions. Or most.

de doctrina deserves every bit of the scrutiny and commentary it has received over the past millennium and a half. It certainly deserves better than I’ve given it, but since I’ll never have a chance to finish this, I’ll put it here in its unfinished, pockmarked, embryonic form.

I. Things, Signs, and the Pilgrimage of Interpretation.
Augustine began de doctrina Christiana in the 390s, but laid it a aside for three decades after getting to somewhere in the middle of the third book. It has been suggested that the preface gives us a clue to the reasons for the interruption. He begins the preface by answering three types of critics of his enterprise: First, those who fail to understand the rules he gives for interpreting Scripture. To these, his answer is that he has done his best, and they must be blind if they cannot see. Second, there are those who will attempt to use the rules but will use them badly so that they get no illumination from Scripture in spite of the rules. These are people who focus on the pointing finger instead of what’s being pointed at, and again Augustine is not to blame for their ignorance. Finally, he addresses those who do not believe that they need rules to interpret Scripture, relying instead on divine illumination alone without any human aid. Augustine spends most time with the last category. Some have suggested that this third class specifically included “Tyconius,” a “Donatist” whose book on hermeneutical rules is discussed later in de doctrina.

Christian freedom, however, means liberation from useful signs, not merely from useless signs. Christianity raises Jews above signs to the realities to which they pointed. When the gospel confronts pagans, it does away with the useless signs altogether. A Christian “attends to or worships a useful sign, one divinely instituted, and does realize its force and significance, does not worship a thing which is only apparent and transitory but rather the thing to which all such things are to be related.” This is true freedom (3.29). But this is not a liberation from signs as such. The church’s signs are fewer and simpler (3.31), but through the proper use of useful signs leads to the thing. Though he doesn’t introduce the ecclesial dimension here, the proper use of useful signs means the healing of the breaches and corruptions cause by misuse of signs in paganism and Judaism. Salvation means restoration of true semiosis, liberation from the idolatrous misuse of signs, and right participation in the absolutely useful signs of the New Covenant.

Everyone has lied. Most people are uneasy about lying, but most also justify at least some of their lies. How uneasy should we be? Is there such a thing as an innocent lie? What is a lie, anyway? And what is at stake in these questions—what, exactly, is endangered if we get the answers wrong?

No one takes a harder line than St. Augustine, for whom all lies are wrong by their nature. This is also the view of the Catholic Church, although it has not been the view of all Christians through the centuries, or for that matter of all Catholics. So when Paul Griffiths, Schmitt Chair of Catholic Studies at the University of Illinois at Chicago, advertises an Augustinian theology of the matter, one knows he will be defending embattled ground.

In fact, his project in Lying: An Augustinian Theology of Duplicity is more difficult still, for the view of lying that Griffiths proposes is even stricter than that of the Church—though not, in his view, stricter than that of Augustine. The Catechism of the Catholic Church (A4 2482) takes its definition of what it is to lie from Augustine’s De mendacio (On Lying): “A lie consists in speaking a falsehood with the intention of deceiving.” What the text probably means by falsehood is what St. Thomas Aquinas called “formal” falsehood and Griffiths calls “duplicity”—deliberately speaking what one believes to be untrue, whether or not it is, in fact, untrue. So understood, the definition includes two conditions regarding intentions. To tell a lie, (1) I must intend a mismatch between my thought and my word, and (2) I must also intend to deceive by it. This is where Griffiths becomes stern. In his view, the deliberate mismatch of word to thought is always a lie, whether or not I intend to deceive anyone.

In his conclusion, Griffiths explores another favorite theme of Augustine’s (though in doing so he sounds a bit like Stanley Hauerwas): no one has the power by himself to abandon the lie; but we can “apprentice ourselves” to the Church, to the community of truth, whose principal speech-act is adoration, and through which God pours out sanctifying grace. The theme, then, is the relation between the City of God, founded on this aspiration, and the City of Man, founded on its denial. Griffiths’ terse comments about the former are interesting. About his comments on the latter, the less said, the better. Let us grant his contention, for example, that lying is pervasive in every political regime, including democracy, where lying typically takes the form of pandering to voters in order to attain elective office. Does it really follow with so little argument that the Christian may never seek elective office, or that a Christian may never prefer democracy to forms of government in which lying is even more pervasive? But the book should not be taxed too heavily for the tendentiousness of its nominal conclusion; its real conclusion, which is far more interesting, is to be found in part one.

Augustine thus contributed more than is generally realized to what is best in the modern political world. Ironically, however, he may have contributed also to what is worst. If so, his contribution was unintentional, for it stemmed from his doctrine of election, which is not explicitly either social or political. But in his handling of the doctrine he may inadvertently have helped to stimulate the modern passion for unification.

The Augustinian dichotomies are familiar. Some pertain to the outward world: empire and Church, history and eschatology, the pagan era and the Christian era. Other dichotomies pertain to the mind. These include the subjective, as illustrated by Augustine’s explorations of our consciousness of time, and the objective, as exemplified in his efforts to establish the primary truths of Christian doctrine; they include also faith and reason, a polarity manifest throughout Augustine’s writings.

There are other dichotomies. At the very center of Augustine’s thought are antitheses pertaining to freedom and arising from the fact of sin—for example, freedom and the law, and freedom and grace. And of special note is the dichotomy of universality and particularity, the former inherent in the assumption that God and morality can be known in some part through the rational categories available to all human beings, the latter implied by the central Christian idea that God is not fully comprehensible in terms of general qualities but is a particular God, the God of Abraham, Isaac, and Jacob, who became incarnate in Jesus Christ. Above all other dichotomies is the famous antithesis of the City of God and the City of Man.

This is far from an exhaustive enumeration, but what shows forth in all Augustine’s dichotomies is his cast of mind. He habitually refrained from fusing antithetical social institutions, mental faculties, temporal periods, and the like. He tolerated, and even emphasized, polarities and tensions.

Nonetheless, in Augustine presumably, as in every human being, the love of God was not an entirely uncontested motive. Augustine may have been always of a divided mind, entertaining impressions of divine wrath and justice that rested uneasily in company with his primary affirmation of divine beauty and mercy. Or he may have changed in some degree; one of his most sympathetic interpreters, John Burnaby, remarks in his Amor Dei that “nearly all that Augustine wrote after his seventieth year is the work of a man whose energy has burnt itself out, whose love has grown cold.” One or the other hypothesis seems to be needed to account for Book XXI—destined for as wide an audience as anything else Augustine ever wrote, apart from the Confessions. In any case, it appears that Augustine himself may have inadvertantly weakened the center that he so much loved and that was so vital to the social and political vision which he embodied in his writings and taught to a civilization.